What Now… The US has Elected….

Categorised as: IT, New Zealand

America has elected and the respect for a democratic choice requires all to accept the result.. So now the question arises, what America and the world has to expect from a President Donald J. Trump.

After the Brexit, it is a second event that falls from the norm, for which there are no patterns of action. For Trump as an anti-politician, he is also an incalculable “president-elect”.

His declared sympathy for Vladimir Putin, his basic readiness to use nuclear weapons, his tyrannical attitude towards other states, such as Mexico, do not point to a course aimed at peace and friendship. The already more difficult international cooperation will face new challenges.

How does the dangerously divided country appear as a world power?

There is also the question of how a country, which is dangerously divided by the election campaign, wants to appear as a world power and how it can get back together at all. The majority of Americans have massively offended a large part of society: Latinos, blacks, Muslims, Jews, women. Basically, Trump was alone on the side of the white man. Hatred against migrants is not only inhuman, but also unwise in a globalized world.

Just as industry is no longer the one that the US has once made great. Today, it is not just about cars, coal and steel. A modern economy is an economy of minds, not of muscles. Trump has promised to make America strong again for all those who feel too short. It may be curious whether he succeeds in this, or whether his promises lead to disappointment. One thing is clear, there will be droves of Americans looking to settle elsewhere to escape such a narrow minded future that is full of hatred and scare. Surely Al Qaeda will be sitting back laughing as America self-destroys.

With Europe in the doldrums now facing Turkey falling apart and landing on the German boarders for help and handouts every eye is on Australasia for people to hide from the world falling apart.

NZ be prepared for a run for our boarders, open up immigration for some of the top talents the world has to offer and embrace filling all the blank spaces in the country to attract hard working people from the Americas and Europe. This is our opportunity to bring in those clever brains we urgently need to help our country to shine through the next century. 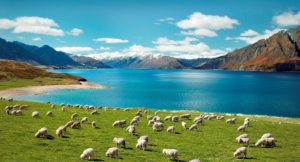